We have been here before... 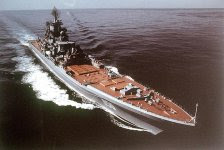 The Russian Navy confirmed on 09 September 2008 that a fleet of warships belonging to the Russian Northern Fleet was preparing to cross the Atlantic Ocean and head for the Caribbean. Washington immediately responded by mocking the Russian move, which is widely considered a response to NATO's increased naval presence in the Black Sea. U.S. State Department spokesman Sean McCormack jokingly said that if Russia really intended to send ships to the Caribbean, "then they found a few ships that can make it that far."

The squadron, led by the Northern Fleet's flagship nuclear-powered Kirov-class battlecruiser Pyotr Veliky (named after Peter the Great, Czar Peter I of Russia) - one of the world's largest heavily-armed nuclear-powered guided missile cruisers - will participate with the Venezuelan fleet in the Caribbean naval exercise in November 2008. During the joint exercises, the Russian navy is expected to deploy Moscow's most modern destroyer, the Udaloy-class Admiral Chabanenko anti-submarine destroyer, a rescue vessel and a tanker ship. This will be Russia's first maneuver in the US backyard in nearly 20 years. The naval exercise will be conducted in Venezuelan waters between the 10th and 14th of November. The Russian and Venezuelan Navy will together perform dry runs of relief operations and test their tactical communication systems.

The official Russian governmental news service Russia Today stated that "The fact that the Russian cruiser was not designed as an instrument of attack, but instead for nuclear containment and defending nuclear submarines, this exercise looks more like an invitation to a dialogue with America rather than a military threat. Moreover, the fact that the American presidential campaign has entered its final stage, it is expected that both candidates Barack Obama and John McCain are going to exploit this naval exercise to their own benefit, verbalizing on the "return of the Russian threat". This rhetoric may become the decisive factor for one of them to make the White House his home for the next four years."

Russia announced in 2007 that its Navy had resumed, and would build up, its constant presence in different regions of the world's oceans. A naval task force from Russia's Northern Fleet, consisting of the Admiral Kuznetsov aircraft carrier, the Udaloy-Class destroyers Admiral Levchenko and Admiral Chabanenko, as well as auxiliary vessels, conducted from December 2007 to February 2008 a two-month tour of duty in the Mediterranean Sea and North Atlantic.

The Russian Kirov Class Heavy Missile Cruise Ship are the world's largest 'cruisers' and might best be termed "battle cruisers&quot. Originally designed as a large antisubmarine warship to search for and engage enemy ballistic missile submarines, the Kirov's role was expanded to engage large surface targets and provide air and antisubmarine protection to naval forces after the introduction of the Granit antiship missile system. There are substantial differences in the equipment of each unit of this class.

The ship is armed with the Granit long range anti-ship missile system, known in the West as the Shipwreck missile. Twenty Granit antiship missiles are installed under the upper deck, mounted at a 60 degree elevation. The long-range missiles cannot be controlled once launched, but do have a multivariant target engagement program. When ripple-fired the missiles share information while in-flight. The lead missile assumes a high-level flight trajectory enabling it to increase its target acquisition capacity, while the other missiles follow at a lower level. If the lead missile is destroyed, one of the other missiles will automatically assume the lead role.

The ship's propulsion system is based on a combination of nuclear power and steam turbine, with two [four according to some sources] nuclear reactors and two auxiliary boilers. The propulsion system provides a full speed of 31 knots. When operating on the auxiliary boilers the ship's speed is 14 knots and the ship has an endurance of 60 days. The selection of the machinery was determined by the role of the cruiser and its assigned missions. The automated main nuclear machinery comprises two reactors (to produce steam for operation), two main geared-turbine units developing 70,000 hp each (to ensure full cruiser speed of at least 30 knots) and two stand-by steam boilers of 115 t/h capacity. The stand-by steam boilers provide for development of 17 knots with nuclear reactors shut-off and ensure an operation range of up to 1,000 miles with shipborne fuel. The main machinery is arranged in three compartments: one compartment houses two nuclear reactors, the two others house geared-turbine units and steam boilers, respectively.