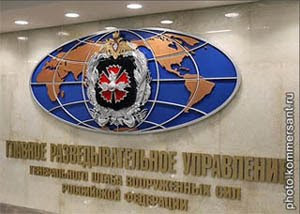 Chief of the GRU - Alexander Shlyakhturov

Main Intelligence Directorate, or the GRU in Russian (for Glavnoye Razvedyvatelnoye Upravleniye) is the foreign military intelligence directorate of the General Staff of the Armed Forces of the Russian Federation. The chief of the GRU is subordinate only to the Chief of the General Staff and the Minister of Defense and has no direct connection to the political leadership of the country.

The GRU was created on October 21, 1918 under the sponsorship of Leon Trotsky, who was then the civilian overseer of the Red Army[4]; it was originally known as the Registration Directorate (Registrupravlenie, or RU). Simon Aralov was its first head. It was given the task of handling all military intelligence, particularly the collection of intelligence of military or political significance from sources outside the Soviet Union.

With the dissolution of the USSR at the start of 1992, the GRU became for a time the principal intelligence body of the Main Command of the Commonwealth of Independent States Armed Forces. Following the April 1992 creation of a Russian Ministry of Defense, however, the GRU became Russia's military-intelligence arm.

In the 1990s, unlike the SVR, the GRU was involved in the conflict in Chechnya. In 1996 Dzhokhar Dudaev, the separatist president of Chechnya was assassinated, when military intelligence successfully homed in on Dudaev’s cell phone signal and fired a missile in his direction. During the first and the second Chechen war, the GRU was also involded in the conflict through special operations forces spetsnaz units, deployed in Chechnya. Spetsnaz is subordinate to the military intelligence. In the yearly 2000s two Spetsnaz Special forces brigades, termed East and West, were made up of ethnic Chechens. The primary role of both brigades was the liquidation of suspected insurgents and their work is held in high esteem by Moscow. In August 2004 Sergey Ivanov, Russian minister of defense, met with the Spetsnaz commanders to declare his support and supply them with more advanced weapons.

On February 13, 2004, a white Toyota Land Cruiser carrying Zelimkhan Yandarbiyev, a Chechen warlord and vice president of the breakaway republic, and his 13-year-old son was blown up in the Qatari capital of Doha. No one took responsibility for the attack, but soon three Russian secret services' agents were arrested. Two of them were accused of killing, found guilty and then handed over to Russia. It was widely reported that both officers were agents of Russian military intelligence.